Chocolate Hearts at the Slate

Chocolate Hearts at the Slate
You don’t see a lot of plays about characters at the end of an arc. Or at least that’s not where they start out. Everyone does seem to start there though in all three plays by John Ruoff going under the title Chocolate Hearts, produced by James Oliver Burrows’ World Stage now playing at the Slate.
In Confessions of the Cocoa Luna, three Americans have run away to Costa Rica late in life after things have hit dead ends. One is almost literally sleepwalking in the cabana while the other two, played by John Murray and Connie Murray, look back and forth between the moon and their regrets.
Murray and Murray basically reprise their roles in the second play, the eponymous Chocolate Hearts. Connie as two-time widow Meg becomes a sort of late-middle-age manic pixie dream girl who snaps John Murray as dentist Dr. Doug Smile (really) out of his funk. They meet in a cemetery where Doug has come to visit his wife’s grave. There is a sweet moment at the end where the doctor uses his dental incisiveness to uncover Meg’s scheme.
Ruoff writes dense, witty dialogue with plenty of humor and flat out jokes mixed into the repartee. When the actors get going it sort of sweeps you away. And they really get going in the third play, Bitter Sweet.
But at first, the dialogue has to wait. Bitter Sweet opens with a show within the show, a ten-minute silent clown act by Finney and Feeney, a vaudeville comedy team. Leah Carrell as Finney and David Hayes as Feeny pull it off wonderfully, stealing each other’s hats, fooling around with a cigar and a cigarette lighter such that neither one ever has both. Feeny chases after a staggering Finney with a beach chair, trying (and failing) to make sure she lands in it instead of on the ground. It’s pure physical comedy and I demand to see more of it!
The show takes off when the clown act ends and the pair are backstage afterward. Finney has refused to take a bow at the end of the show. Feeny confronts her and that leads the two to talking about what they have been doing all these years as a team, and what kind of team are they anyway. Finney wants out. Feeny is stuck.
Hayes and Carrell take Ruoff’s dialogue and make it so real. With all of the jokes and zingers and banter, it could have been easy to lose the depth of what’s really going on between the two. But the actors keep all of the comedy and all of the heart. By the end, it’s clear what will become of the vaudeville act. It’s at the end of its arc. But maybe a new one is beginning?
Bitter Sweet is a gem. I think it could really go places. See it now so you can say you saw it when.

Popular posts from this blog

Last of the Boys at Seattle Rep 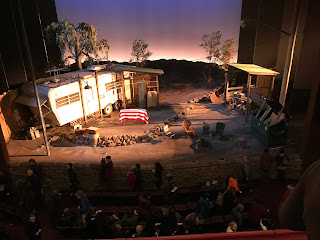 We are still living in the aftermath of the Vietnam War.  So says Steven Dietz in Last of the Boys, now playing at the Seattle Rep.

Actually, so he doesn’t say.  Here’s a quote in a recent Seattle Times article, “I’ve long thought that this play is not ‘about’ Vietnam any more than my play ‘Lonely Planet’ is about HIV/AIDS.” But for me, it really was.  The war determined the path of each of the five characters.

Ben (Reginald André Jackson) is a Vietnam veteran.  He’s the last resident of a trailer park in California’s Central Valley.  With a wall of sand bags forming the front of the stage (see photo) and stacked in a neat line in the back, he is literally barricaded in.  And he is haunted, again literally, by the war.  The ghost (Josh Kenji) of a kind of unknown soldier appears so regularly at night that Ben prepares for him by ironing a clean, white shirt so he can look good for each appearance.  Their regular nighttime visits revolve around the legacy of Robert McNamara, Secretary…
Read more 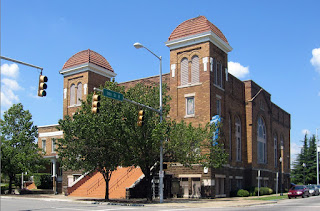 Nina Simone: Four Women calls itself a play with music and does, in fact, have two complimentary sides.  There is a line early in the play that sums it up, in part.  I don't remember it exactly but it's to the effect that when the scars heal over, they turn out blacker.  Playwright Christina Ham is saying the harder you try to erase identity, the stronger it comes back.  It's an anthem to perseverance.  And it applies to the four characters both as black women and as their individual selves.  They claim and hold their power.

At the same time, the characters are at their strongest when they are singing together.  Once early in the show, this theme became apparent and then later, in the number Sing: Oh Mary it really paid off.  Throughout the show, each of the characters had been advocating for their own point of view.  There was a kind of dissonance.  But when they came together in song, again, there was power. The song seemed to rise out of each of them spontaneously from …
Read more

Bonus film review: I'm having a reaction to CATS 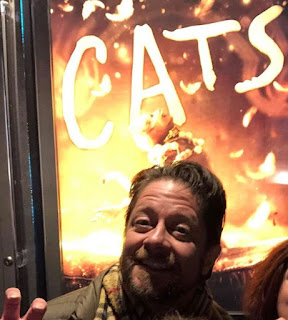 I was expecting -- hoping for, really, a rum tum train wreck but I actually liked it. I liked how they tweaked the story to have Macavity be a bad guy, trying to cheat the contest. I liked how they had Victoria, the outsider, draw Grizabella back into the Jellicle ball and thereby gain her admission to the group. I liked when Judi Dench, without even a trace of camp, delivered a line to Macavity that was something like "You'll never get to the heaviside!" thereby making it campy AF -- like in another movie when she said of Lizzy, "Are the shades of Pemberley to be thus polluted?"

The show has persisted for decades because of Memory. The creative team here crushed it. They built a beautiful structure around Jennifer Hudson's incredible (snots notwithstanding) performance of the song, especially including the coaxing Grizabella needed from Victoria. I said out loud "sing it already!" two seconds before Victoria said the same thing. I also liked the…
Read more

Patrick Hogan
Patrick is a Member of Dacha Theatre Company of Seattle http://www.dachatheatre.com, for which he has performed in or otherwise worked on numerous shows. Favorite roles include The Nurse in Dream Things True, Dacha's version of Romeo and Juliet and Regis Yaroz in Ghost Party, a devised, improvised, fully immersive, interactive show. Patrick has also written reviews that have been published by The Edmonds Beacon and My Edmonds News. Theatre Puget Sound bio: http://talent.tpsonline.org/?M=10050 Photo credit for profile pic: Kate Drummond, Board Member, Dacha Theatre Company